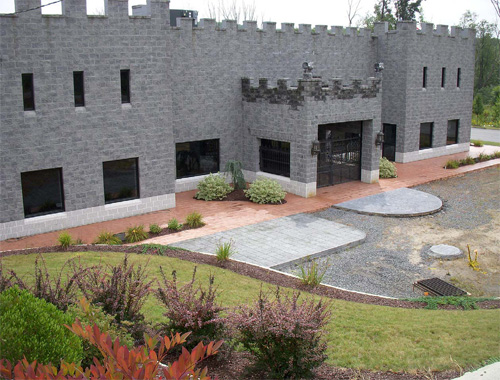 "Castles were made out of stone," Sacco says. "Everything in my castle is concrete that looks like stone."

Concrete Texturing Tool & Supply, located in Throop, Pa., was founded almost 20 years ago, but the roots of the company go much deeper than that. Sacco, the son of a contractor who specialized in ornamental plastering, grew up in a masonry environment. "I always liked concrete as a business," he says.

Sacco worked with his father's company for a few years, but like many young men, he felt the need to explore something different. He drove a tractor-trailer for a while, he says, and one of his deliveries was to a Marriott Hotel that was under construction. As he unloaded air-conditioning units, he noticed workmen installing patterned concrete.

"I jumped down on all fours to look at it. The security guy thought I was having a heart attack," he laughs. "And I said, â€˜I'm just looking at the concrete.'"

At that point, Sacco decided he wanted to work in concrete. He spoke to the concrete crew at the site, and soon parked his truck forever.

He started his concrete business in 1989, and within a few years, he was focusing solely on decorative concrete.

However, like others in the decorative concrete trade at that time, Sacco noticed it was difficult to get the materials needed for jobs. So he began buying his supplies in bulk and sold the excess materials to other contractors.

In 1998, he bought the commercial property where his store stands today. "The goal was to build a warehouse and expand it as the need for the supplies increased, and I backed myself right out of the installing end of the business," he says. "I didn't want to be competing with local installers because I didn't think that would be good for business."

Concrete Texturing Tool & Supply is a two-pronged operation: a distribution center for materials and a training facility for contractors to learn the trade. The original building for the business was built in 1998, and in 2003, a second warehouse was constructed, as well as the showroom at the front of the building. The showroom is the part that looks like the castle. The complex also includes classrooms, an outdoor training area, and an indoor area where contractors and others interested in learning decorative concrete can do hands-on projects in all types of weather. "We sell the products, and we also give advice on how to use the products properly," Sacco says.

The business is a full-stock distributor for Brickform and Solomon Colors. It also carries Buddy Rhodes Countertop Mix, Arizona Polymers and many other brands. "We stock everything that is concrete-related, either tools or products," Sacco says. "We keep a tremendous amount of colors and dyes and release agents in-house. We also have our own pigment blender on-site, which was a nice addition to the business. We can blend custom-matched colors for any needs."

When asked what his best-selling products are, Sacco pauses a moment before he answers, and finally picks colorants. "Color is so much a part of everything we do," he says. "It's in everything, whether we're doing a ground-and-polish floor or countertops or anything that is pattern-stamped."

The bulk of Sacco's customers are contractors and retail outlets. "We sell to a lot of business-to-business businesses, I guess would be the best way to put it."

To reach out to potential clients, Concrete Texturing Tool & Supply advertises in trade magazines and does some local advertising, but a lot of Sacco's business comes from word of mouth. He says the recommendations come because he keeps his prices competitive and treats customers well.

He sells both nationwide and internationally. "We sell to a lot of countries I never expected to, like Japan, China, England, Germany and Estonia," he says. "We shipped a product to New Zealand and it got there in three days. The guy e-mailed me to say it was outstanding service, considering we're half a world away and he can't get local products in under a week."

Sacco considers the training seminars he offers to be a vital component of his business. While the seminars might help bring customers into the store, Sacco says his main concern is teaching contractors and other users the right way to use the products. " 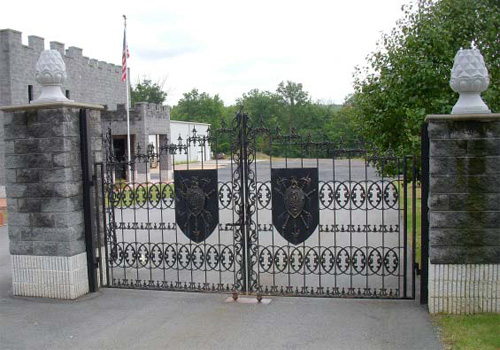 I have the knowledge, and I enjoy sharing it," he says. "It doesn't make sense for me to keep all that knowledge to myself, so we run programs here to lessen the learning curve for others." The training sessions are hands-on, using a real slab of concrete. "

The training seminars are run like real jobs," Sacco explains. "We do all the steps, start to finish, of every aspect of doing the job."

Customers tell Sacco when they are interested in learning a certain topic, and he keeps a running list for each topic until there are enough interested people to hold a class. Approximately 90 percent of the attendees are contractors, but some who take the seminars are trade-school or union instructors. Sometimes Sacco will let do-it-yourselfers come in to learn decorative concrete techniques, as well. If he needs to, he will go out to a job site to conduct a seminar.

The castle showroom is an important part of his business, as it gives customers the chance to see samples of completed projects. "A lot of times completed samples were in someone's home or business, and to show the work to potential clients meant disrupting private lives," Sacco says. "I wanted to build an area where the general public could come and look at the different options with decorative concrete without invading someone's area."

All of the employees are trained to understand the products they sell, and they are involved in the training. He has 10 employees on staff during the busy summer months, while during the off-season he scales back to six. 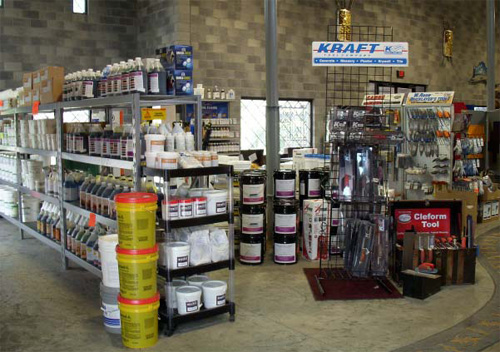 Keeping busy in the winter months is always a challenge, Sacco says. During that time, he tends to sell more interior products.

From getting down on all fours to becoming the lord of his castle, Sacco has grown a successful business over the past 20 years by following one general philosophy. "Be honest with your customers," he says. "Treat them how you want to be treated."