Traditional acid-based stains may be today’s gold standard for the decorative concrete industry, but their water-based cousins are growing in popularity due to their ease of application, quick cleanup and range of colors.

Hardly lingering shyly on the sidelines is yet another technology: acetone dyes. Each is distinctly different, and each offers its own advantages and disadvantages. The main things to know are that surface prep is different, particularly between acid and water-based stains, and that using the right sealant for the application is a must.

While their attributes are making water-based stains an attractive option for many jobs, both suppliers and contractors say one of their best uses is complementing acid-based applications by covering holidays (bare spots) and providing highlights and depth to acid-stained surfaces.

On the up and up

Just how popular water-based stains are is somewhat open to debate. However, just about everyone agrees their use is on the upswing.

“We added them nine or 10 years ago, but they’ve probably become pretty popular in the last three or four years,” says Tyler Irwin of Proline Concrete Tools Inc. “With our international stain sales, I’d estimate sales as about 60 percent acid to 40 percent water-based stains, but in the United States I’d probably flip those numbers. Water-based has become dominant over acid.”

John Reynolds, director of training and technical support for Brickform, says he’s been using water-based stains for more than 15 years now, although he isn’t seeing the numbers Irwin reports.

“Acid stains are still extremely popular for us,” Reynolds says. “Brickform sells probably at least three times as much acid stain as we do water-based. However, they’re coming up in popularity and competing more and more with the acid stains.” 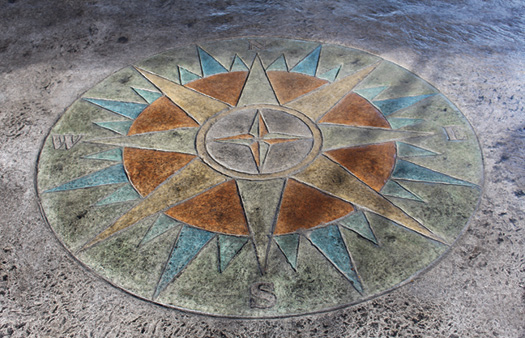 Reynolds opines that much of the growth of water-based stains is due to its wider variety of available colors and that cleanup is easier than when using acid stains.

“In coastal California, you can’t even put acid stains on your shelf anymore,” Brunner says. “There’s the corrosive nature of it, and once you’ve neutralized an acid, the water you’ve used to neutralize it with is considered a hazardous waste.”

Still, in one respect water-based stains are not that much different from acid stains. Surface preparation is critical with both products — just different.

While having a clean surface is the key to applying acid stains, when it comes to water-based products Brickform’s Reynolds says it’s critical to know your concrete. While a broom-finished slab will easily take a water-based stain that isn’t true with other finishes.

“If I have a hard-troweled floor, I’ve got to try a number of things,” he says. “Whether it’s acid-etching or potentially grinding the floor, it has to be opened up enough to get a water-based stain to penetrate properly.”

Rick Ogden, owner of Rick Ogden Construction in Pryor, Oklahoma, and a long-time user of water-based stains, agrees that preparing the floor correctly is key with the products. Regardless of what you use, though, it’s critical to follow directions.

“I use Smith’s stains a lot, and they’re really good stains, but you’d better follow their instructions to the letter,” he says. “I’ve also learned not to try to shortcut things. When it says to let it dry 24 hours, you let it dry for 24 hours.”

Because of their broad color range (everything from earth tones to pastels), their ability to be applied full-strength or diluted to achieve different looks, and their reliability, water-based stains are often compared to acetone dyes, which are also growing in popularity.

Tim Frazier, training and tech adviser for The Stamp Store based in Oklahoma City, explains that acetone dyes originally came from the polishing side of the industry. Brickform’s Reynolds adds that a dye uses a soluble pigment different from those used in water-based stains, which are not soluble.

“I like to layer my colors,” he says. “I can start with a lighter color and then go darker and create a nice piece of art with water-based stains. With a dye you’re not going to get that much control.”

It’s that layering ability that makes water-based stains a real complement to acid stains. Because many manufacturers make the same color in both formulations, it’s possible to correct problems with an acid stain using a water-based application.

“Contractors will have problematic areas where there was a surface contaminant that didn’t stain,” says Eric Hamlin, owner of The Stain Store in San Antonio, Texas. “They’ll highlight that with a smaller amount of the water-based stain so they’re not stacking. They can also do a two-tone depth that looks nice.”

Correcting ability is a plus

Both Smith’s Brunner and Cory Huber, owner of Huber Custom Coatings in Quincy, Illinois, say the water-based stains are great for making all kinds of corrections, including when an acid stain doesn’t produce quite the color expected.

“You have those times where you should have used more acid stain or you have to fill in the blanks,” says Huber. “That’s where a cup gun and an air compressor come in handy. You can really control where the color is going and put it down in lighter lifts.”

Unlike both acid and water-based stains, acetone dyes lack UV stability, which limits the locations in which they can be used. However, says Hamlin, that’s changing.

“They’ve come out with UV-stable ones over the past few years,” he says. “The main thing with acetone dyes is to follow their guidelines for use and prep before you do the work. You can still have issues, but I like acetone dyes if they’re done right.”

The secret to success with any of these products is using the best sealant for the job, says The Stamp Store’s Frazier.

“Proper preparation and then maintenance are really the keys to everything, and your durability depends on your maintenance and wear,” he says. “The type of protectant sealant you put on top is going to determine the wear. It all depends on what your expectations are.”

Of course, that requires information, and Ogden says there’s probably nothing more important that his fellow contractors can do than get the right information from the manufacturers and suppliers before they start any job.

“There’s so much information out there,” he says. “YouTube will show you how to prepare the floor and how to apply the product. When I started, the information and the equipment were all different, so what we’ve had to learn has grown exponentially. We’ve learned to prepare, and we do that because failures can be very costly.”

When it Comes to Public Art,

Every craftsman likes to consider himself an artist, but Steven Ochs fits the bill more than most. A professor of art at Southern Arkansas University, Ochs also owns Public Art Walks and is considered a leading purveyor of concrete public art in the form of murals.

Ochs started using water-based stains for his projects more than a decade ago. For him, working with concrete is similar to working on thick, absorbent paper, and the stains remind him of a medium familiar to many artists.

“It’s so much like acrylics or watercolors,” he says. “The first time I used it, I thought this feels very familiar; it’s like it wasn’t a new material to me. I just added water, stirred it up and thought, ‘I know how to use this.’”

Ochs explains that he began working in concrete when he started helping a friend doing residential work.

“We kind of upped it to meaningful imagery for the residents,” he says. “The goal was to communicate who these people are and how they want their guests to feel. It started out as decorative concrete and then it became public art.”

Ochs says there are several reasons he prefers working with water-based stains, starting with the simple fact that what you see is what you get.

“Other than drying a few shades darker, you get exactly what you see,” he says. “It’s not like an acid where you’re relying on a chemical reaction and hoping it’s light enough or dark enough. With acid you also don’t know when it’s going to work.”

He stresses the importance of good cleaning and profiling of the concrete before he applies any water-based stain, but says once that’s done, even if there are mistakes, it can be very forgiving.

“You can mix it very thin and use it like a wash,” Ochs says. “You can build it up, you can overlap it, or you can use it in almost a concentrate form for an opaque result. You can create the look you’re going for.”

Just about any technique that works with acrylic paint will work with water-based stains, including using an air brush, or doing wet-on-wet or wet-on-dry applications, Ochs adds. And, while it’s typical to work from light to dark, by going dark to light, it’s possible to create illusions of depth.

As a general rule, Ochs says if he’s doing a residential job he tries to use stains directly from the bottle. The reason: if something heavy is dragged across the stained surface, the repair is easy. For his public art pieces, “Everything is custom mixed.”

The final touch, of course, is a good sealant.

“I use a solvent-based acrylic in a couple of thin layers so it’s breathable and protected,” Ochs says. “Then, I’ll put down two or three layers of a water-based mop-on sealer — something with 35 percent or 40 percent solids — because everything you do with a water-based stain is pure aesthetics. The end result is all about the sealer and maintaining that sealer.”