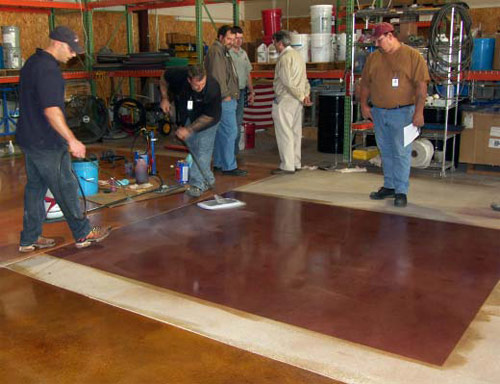 ColorJuice Concrete Silicate Colorant, the latest product from Arkansas-based American Decorative Concrete Supply Co., is not only inspired by Mother Nature - it's designed to withstand Mother Nature. Available in sheer hues that evoke the color palette of the outdoors, the pigment promises to resist fading from the sun's UV rays and other elements when it's mixed with a compatible densifier and applied to outdoor concrete surfaces.

A microengineered formula allows the particles of the colorant to submerge deeply into the concrete, resulting in a longer life for the original shade, says American Decorative Concrete marketing manager Alex Darmstaedter. A small amount of ColorJuice is mixed with a silicate densifier that fills the pores of concrete for a hardening effect. The pigmented densifier is then applied to a concrete surface with a sprayer. The densifier hardens, seals and dustproofs the surface without changing its texture, while the ColorJuice adds color. The end result looks similar to the results of an acid stain, and the process can be completed in less than a day. 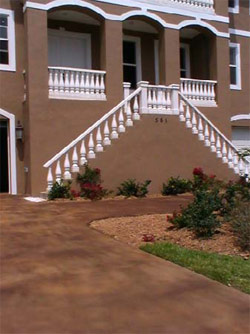 "We developed ColorJuice to answer the needs of contractors who found various problems with acid stains and integral-colored concrete products, especially when used outdoors," Darmstaedter says. "It's especially formulated to withstand wear and UV rays from the sun, which cause a degenerating effect when traditional staining and dyeing methods are used."

While the weather-resistant virtues of a ColorJuice-pigmented densifier are best demonstrated on outdoor surfaces (driveways, sidewalks, patios and pool decks), the mixture can also be used to transform indoor concrete floors. Any concrete surface, whether it has been mechanically or broom finished, can be enhanced by a densifier tinted with ColorJuice.

The speed that this method offers over the typical three-day process involved with acid staining is a significant benefit. "It looks like an acid stain job without it being an acid stain job," Darmstaedter says, adding that a garage floor can be used in less than a day after the application process has begun. "People often have a lot of junk to remove from their garages, and with acid staining, they have to wait at least three days, maybe even up to a week, before using the garage again. With this method, they can have everything back in their garage in the same day."

Water-based ColorJuice is currently available in 12 colors - Gold, Caramel, Sand, Chocolate, Walnut, Black, Mahogany, Saddle Brown, Terra Cotta, Burnt Sienna, Olive Green and Slate Blue - and more hues are on the way. Colors can be mixed to achieve a unique shade, and Darmstaedter says the translucency of the hues allows visibility of the concrete's matrix and aggregate. "Each color takes on the characteristics of the floor it's applied to," he says.

The application process is not only quick, but easy. After the concrete surface has been cleaned, the ColorJuice-tinted densifier is applied by one person using a mechanical or pump sprayer while a second person brooms in the product. As the colored densifier sinks into the concrete, the silica in the densifier reacts with the calcium hydroxide in the concrete, hardening the concrete's molecules and crystallizing the floor. The result is a surface that's durable, dust- and stain-resistant and enhanced by the sheer, lasting hue of ColorJuice. American Decorative Concrete recommends applying its Proguard Stain Shield to finish and protect the floor.

Variations in a contractor's application method and color choices can produce an array of unique looks. For example, a densifier mixed with ColorJuice in Gold can be applied all over a floor in the traditional manner. Then, a densifier tinted with ColorJuice in Terra Cotta can be sprayed or sponged on various spots of the floor, resulting in a worn, antique look, Darmstaedter says. A ColorJuice-tinted densifier can also be sprayed onto a color-free surface through a stencil for an artistic "airbrushed" look.

Darmstaedter stresses that compatible densifiers must be used with ColorJuice to avoid problems. (Visit American Decorative Concrete's Web site for a list of recommended densifiers.) Contractors must adhere to ColorJuice's floor preparation and cleaning instructions and refrain from overapplication of the densifier/ColorJuice mixture (which can cause flaking). The company also states that the finished surface will be simple to clean and maintain, but warns that certain chemical spills could cause shadowing if they are not cleaned quickly enough.

After its debut at the World of Concrete expo in Las Vegas in February, ColorJuice quickly became popular among contractors, Darmstaedter says. "Since its introduction, we have been awash with orders for ColorJuice," he says. "Contractors and designers have been discovering its benefits and ease of application over traditional methods."

The product is currently distributed worldwide. ColorJuice application training is offered by American Decorative Concrete as part of the company's Applicator Training Workshop, which is held regularly at its headquarters in Lowell, Ark.