There's one in Oklahoma City, Okla. Surrounded by parking lots that look more like giant patchwork quilts than areas to park your car, The Stamp Store takes advantage of what would otherwise be a missed opportunity to display decorative concrete.

Owner Doug Bannister went against the advice of the architect who designed the building when he nixed the idea of a cohesive, smartly styled lot in favor of a hodgepodge of concrete treatments. "Contractors can bring their customers out on weekends or after hours to let them see what can be done with concrete," Bannister says. "We even provide a map that tells them what colors and tools were used, to make it easier for them to recreate the look."

Near the east-facing front door is a koi pond complete with concrete-crafted boulders. As you enter the store, you will see wall treatments ranging from bamboo and tree bark to different types of stone. In the center of the floor is a 4-by-4 area stamped in a bush-hammered stone pattern and colored with acid stain. To the left are overlay treatments, both patterned and seamless varieties. And to the right are examples of concrete that been stained, scored or stenciled.Also in that direction is the original sales counter with the first concrete countertop Bannister ever made. The cabinet underneath was veneered with stamped concrete overlay. All of this was done back in 1998.
"Our place is wall-to-wall exhibit space," says Bannister, who's been involved with the decorative concrete business since 1980. He designed the setup himself. 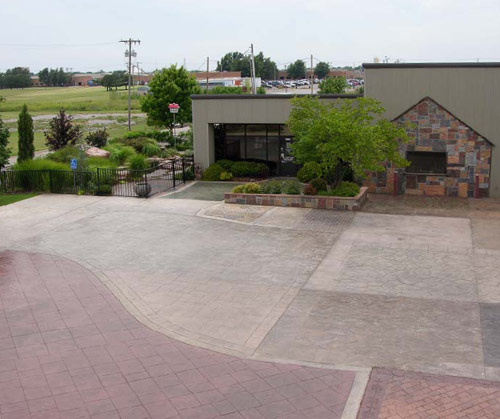 Setting the stage
Bannister grew up in Erie, Pa., where he learned about the concrete business from an uncle. He spent his summers during high school and college working in the field. After he graduated from college in 1968, he did a three-year stint in the Army. When his tour was over, and with only his summer experience under his belt, he went into business for himself as a concrete contractor under the name Professional Concrete Services.

"Everyone thought I should go to work for someone else, but I was ready for self-expression, not to be part of another group," says Bannister. The first couple of years were lean, he recalls, but he learned to organize crews, meet deadlines, do scheduling, balance books and do all the other things small-business owners do.

Over the years, his business grew from basic installation to offering decorative work. He founded The Stamp Store on the side, but soon, he recalls, he had to make a choice. "I was spending 40 hours with installation and 40 hours at the store." Something had to give, so he let go of the installation business. Sales, which had already been climbing, really took off. He incorporated the store in 1995. 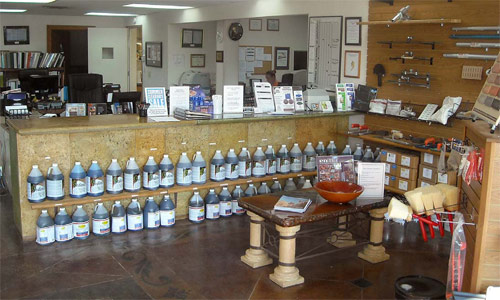 Best sellers
Today, the 14,000-square-foot store (including warehouse space) is fully stocked with decorative concrete products, including color pigments, acid stains, coatings, fiber, hand tools, sealers, sprayers and, of course, hundreds of texture mats and skins, many from Brickform and Proline Concrete Tools. The store also carries its own brand of products it has formulated to meet customer demands, such as SS Rainbow water-based stains (which is made on the premises), SS Specialties sealers and enCounter, a professional countertop system that comes in gray or white.
Bannister sells to both contractors and homeowners, but says he discourages homeowners to the point of refusal when it comes to stamped concrete. "We have a preferred contractor list, and we encourage DIYers to contact one of the people on thelist."

As for top-selling products, he sells a lot of his store brands. Other best-sellers include Arizona Polymer Flooring, Sedona concentrated acid stains and Miracote overlay systems.
"As we matured first as a contracting company and then as a retail outlet, we found there wasn't one company that made the best of everything. So we sought out the best products in each category from a variety of people," Bannister says. 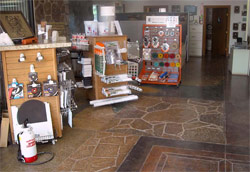 Advice experts
But even the best products won't do the job properly if they aren't applied correctly, he says. That's why it's so important for his employees - as well as his customers - to know the products they sell and use, down to the minutest details. "Our employees attend training seminars right along with our customers. We also have ongoing in-house sessions on an as-needed basis. On staff, I have 13 employees, eight of whom are really competent to take calls and describe processes to people. And there are times when each one is on the phone. Even our bookkeeper can answer questions."
Bannister says they get a lot of phone calls for tech support from people they've never met and about products they don't even sell. And they never turn anybody away. "I remember when someone helped me when I stamped my first set of steps," he says. "Even though my staff is more than capable, I like to pitch in and help out."

Very early on, Bannister explains, The Stamp Store acquired a reputation as being a source for expert advice when contractors needed help. "Education is key to the whole industry," he says. "We find contractors who are educated do better work, collect their money on time, pay their bills promptly and become long-time customers. Their good work advances the industry."

Leading the way
In early 1996, The Stamp Store established its Web site at Thestampstore.com, making it a pioneer in selling its wares online. Later that year, the company began offering contractors hands-on training in a monthly class called a Deminar, which is now offered quarterly.

These classes, which were among the industry's first and have always been limited to 12 students, attracted contractors from as far away as New Zealand, Egypt, China and England. As part of the curriculum, students would pile into a passenger van and be taken to an actual job site to help with anything from integral coloring, stencils and stamps to stains, countertops and overlays. Today, most of the demos are held on the property, but they still include going to a job site and helping with a pour.

In addition to the two-and-a-half-day Deminars, The Stamp Store also offers a two-day countertop class that covers both studio and cast-in-place techniques. No concrete experience is necessary to take the enCounter classes, which are offered once a month at the Oklahoma City store or at various distributor locations.

The newest class - One Day Floors - is also offered monthly. The two-day class introduces contractors to the One Day Floors system, which allows them to turn out floors they can walk on an hour after the final coating application and drive on a few hours later.

Bannister is a senior partner in One Day Floors, which was launched in 2007. "When you put the first layer down (of the One Day Floors system), it nearly disappears," he says, touting the system's exceptional wetting properties. "It goes down into the concrete and seals it. The second coat builds on top of that and the final coat acts as the wear surface. The product is so complete within itself that it performs all functions. It really is remarkable."

The visually clear coating, which can be applied in temperatures ranging from 20 degrees F to 120 degrees F, is really taking off in the commercial market, he claims. Vapor in the slab and humidity in the environment have no effect on it. The highly resistant coating can be formulated to cure slow or fast for interior and exterior use. It can be clear, a solid color, dyed or broadcast with chips of choice.
"I've never found a coating that solves as many issues as this one does," he says. "It's more of a complete system than we previouslythought." 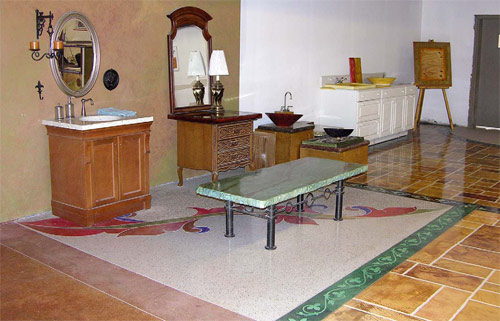 Expanding the business
The Stamp Store ships to contractors all over the country, Bannister says, with about 50 percent of its business in the Oklahoma City area. He says it owes much of its success to a viable presence on the Internet and print media such as Concrete Decor that have helped attract people to the industry. To help with positioning and optimizing the Web site, he has outsourced the work to an IT company. "It's really competitive these days," Bannister says.

In 2006, Bannister opened the 18,000-square-foot Cimarron Building next door to The Stamp Store in an effort to increase sales of decorative concrete products to retailers who could be reached within a one-day ship time. This includes areas as far east as Nashville, as far north as Kansas City and as far west as Albuquerque.

"Cimarron serves as a regional distribution outlet where we make products easier to access for stores in our part of the country," Bannister says, adding the service is a way for stores to reduce inventory and avoid tying up capital. "This way they can have a truckload or a pallet of mixed products the next day from our location. We have good rates through several shippers and offer the same level of tech support and training to other stores through Cimarron as we do our contractors through The StampStore."